Interest in Crowdlending Continues to Rise in Switzerland

Interest in Crowdlending Continues to Rise in Switzerland

Interest in crowdlending continues to increase in Switzerland with professional investors growing in importance in the sector, according to a new study by the Institute of Financial Services Zug IFZ of the Lucerne School of Business, PricewaterhouseCoopers (PwC) and the Swiss Marketplace Lending Association.

The Crowdlending Survey 2019, released earlier this month, found that crowdfunded loans totaling CHF 261.9 million were brokered in 2018, an increase of 40% year-over-year. Of the total volume of CHF 261.9 million, CHF 134.4 million was in the business crowdlending segment (SME loans), CHF 57 million in the consumer segment, and CHF 70.5 million in real estate.

Crowdlending volume and the number of loans in Switzerland, 2012–2018, The Crowdlending Survey 2019

Switzerland had 15 active platforms as of the end of 2018. Last year, only one new crowdlending platform, Funders, entered the Swiss market, showing that the pace of growth of the number of new platforms has decreased significantly, the report says. 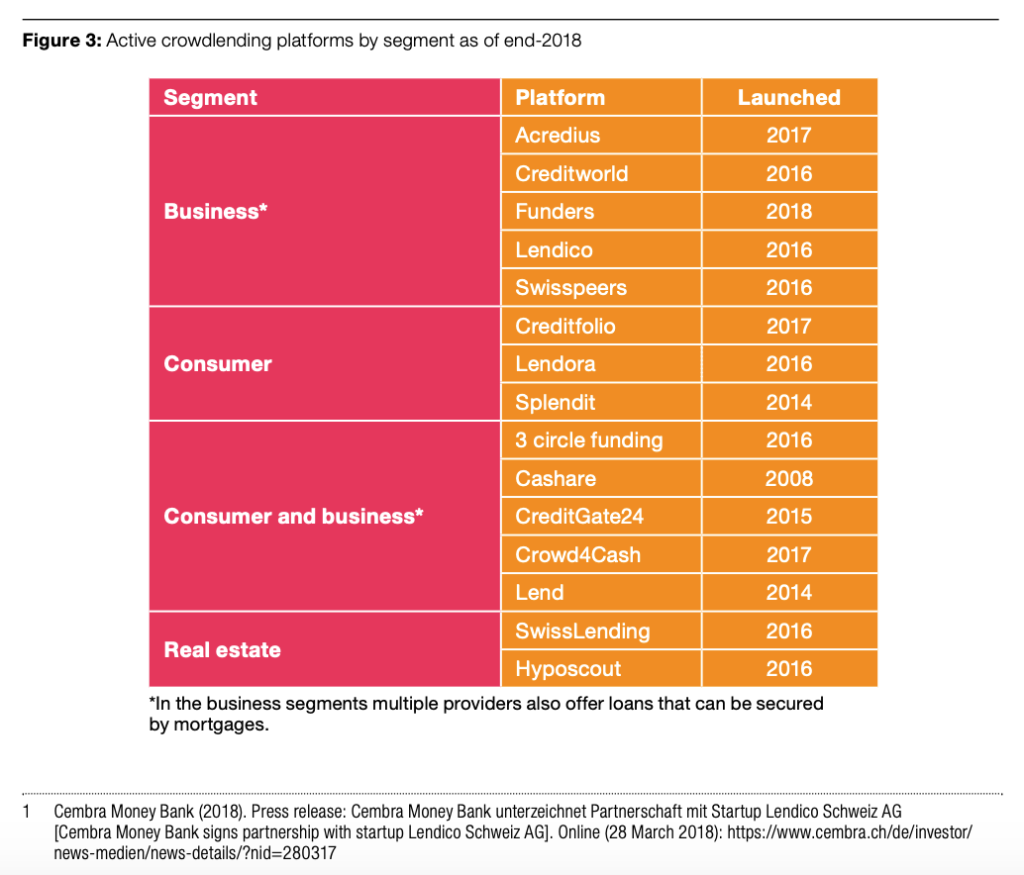 Active crowdlending platforms by segment as of end 2018, The Crowdlending Survey 2019

The study notes the emergence of a number of new platforms geared primarily to institutional investors in the past two to three years.

Bank Vontobel, for instance, launched the Cosmofunding platform in September 2018, which is aimed at entities governed by public law (ÖRK) and private companies. The platform works in collaboration with the Swiss rating agency fedafin and only professional investors are admitted. Since its launch, Cosmofunding has recorded CHF 1 billion worth of credit applications.

Loanboox is another platform active on the ÖRK market. Launched in 2016, Loanboox had brokered loans amounting to CHF 6.5 billion, as of September 2018. Like Cosmofunding, Loanboox accepts only institutional and professional investors. On the borrower side, it is open to municipalities, cities, towns and cantons to finance loans between CHF 500,000 and CHF 500 million. Loanboox expanded to Germany in 2017, followed by Austria and France in 2018, and was valued at CHF 122 million after raising CHF 22 million in January 2019.

Remaco, a direct lending platform that matches companies with qualified investors, is another example, as well as Instimatch, which focuses on short-term transactions, and Systemcredit, a marketplace for SME loans targeted primarily at banks, institutional investors and crowdlending platforms or their investors.

“We anticipate that the market could provide a further boost to growth again when annual growth reaches around CHF 1 billion, since the interest of institutional investors will revive when volumes hit this level,” the report says.

As of the end of 2018, Switzerland’s five largest platforms held a combined 87% market share and the trend could become even more pronounced as larger platforms benefit from better access to institutional investors.

The research predicts numerous partnerships and mergers between individual platforms to take place in 2019.

Approximately half the platforms seeking a partnership also indicated they would be interested in working with other crowdlending platforms or startups.

In comparison, volume reached CHF 186.7 million in Switzerland in 2017.