Blockchain, the technology behind bitcoin and other cryptocurrencies, has the potential to transform the way we exchange assets, providing a secure method for transferring money, contracts, land titles, data, and more, digitally and with few or no intermediaries.

Yet, despite the many potential benefits, applying blockchain and distributed ledger technology (DLT) this way is still in its infancy and many complex challenges remain, according to a new report by the European Commission (EC).

In a report titled Blockchain Now and Tomorrow: Assessing Multidimensional Impacts of Distributed Ledger Technologies, the EC’s Joint Research Centre (JRC), a science and knowledge service, provides an in-depth and practical understanding of blockchain and its possible applications in finance, industry, trade and public sectors.

According to the report, blockchain is expected to bring a series of benefits to a number of sectors by enabling greater efficiency to processes, automation, security, and transparency.

The report cites the application of blockchain in supply chain management, where the technology can facilitate interactions between actors including producers, retailers, distributors, transporters, suppliers and consumers. In this scenario, blockchain allows for product traceability and quality control, enhancing accountability for all those involved.

Another application of the technology can be in the creative industries where blockchain can be used to implement fairer ways of compensating owners and creators through pay-per-usage, micropayments or automatic payment distributions.

In the public sector, blockchain can be used to provide tailored services for specific citizens, and allow for greater trust in governments and improved automation, transparency and auditibility. For example, a government-issued identity on a blockchain can generate time and cost savings for citizens, businesses and public administration in terms of setting up, managing and accessing identities for specific services.

In the financial services industry, blockchain and DLTs are promising to lower the costs associated with the entire lifecycle of a financial instrument, and reduce payment systems’ transactions costs.

Despite the potential benefits of blockchain, several challenges remain regarding integration with legacy infrastructures or standardization and interoperability.

These challenges include performance and scalability, energy consumption, data privacy, but also regulatory challenges such as the validity and enforceability of smart contracts, the nature and financial classification of tokens, and consumer and investors protection, the report says.

According to the report, blockchain is now one of the technologies which is anticipated to have a profound impact over the next 10 to 15 years. The rise of blockchain is witnessed particularly by the sharp growth in blockchain startups and the volume of their funding.

2017 in particular saw a surge in blockchain funding, driven by the explosion of initial coin offerings (ICOs) venture capital investments. The trend continued at a high level in 2018. 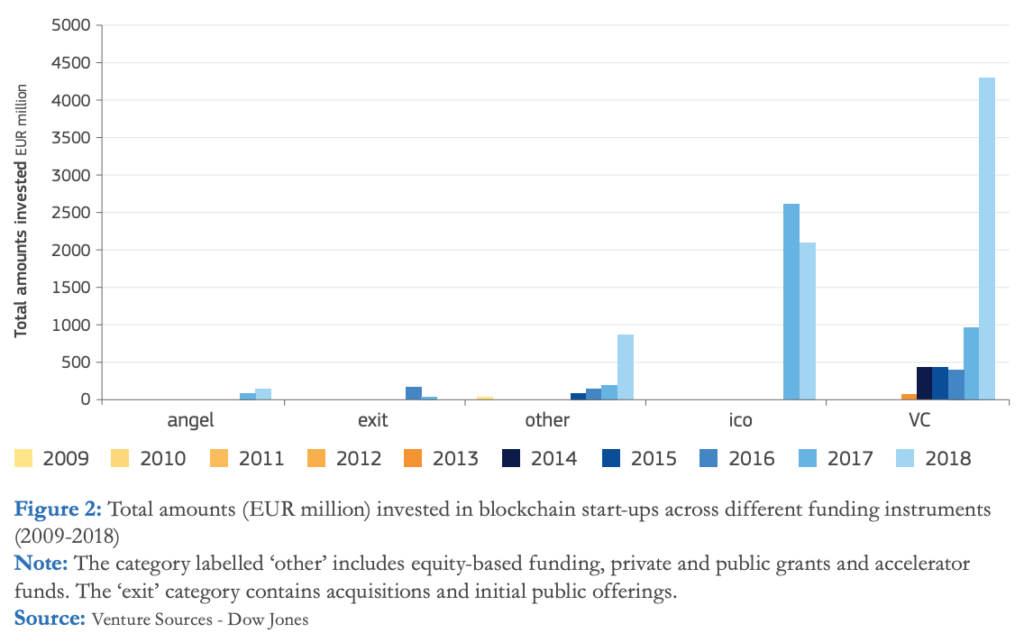 Globally, the US and China are leading in terms of blockchain startups, but Switzerland and Singapore are also displaying particular dynamism, followed by Japan and South Korea, the report says. 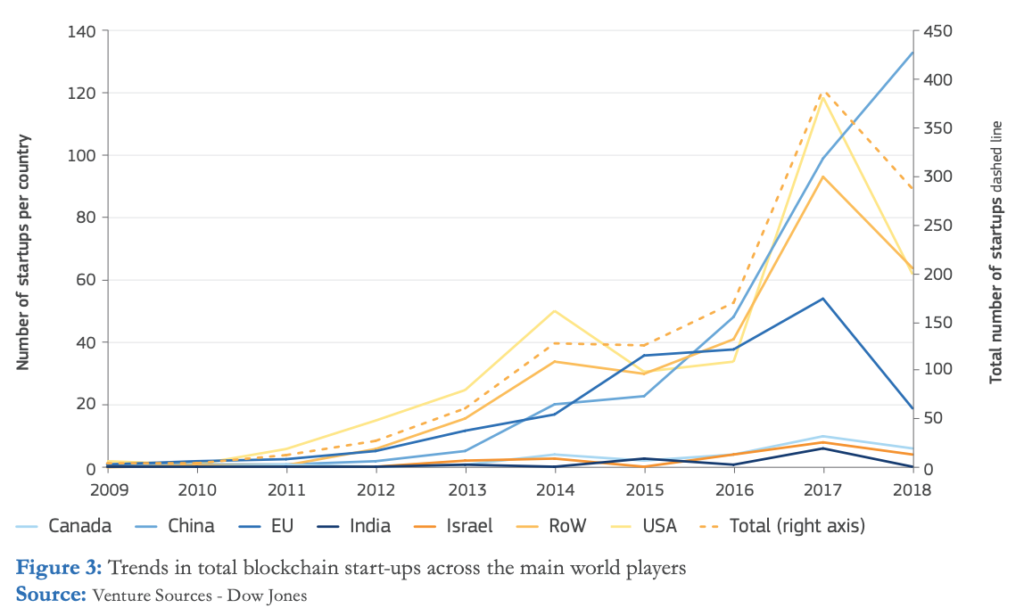 In Europe, it is the UK that’s emerged as the top blockchain location, leading the region in terms of numbers of blockchain startups (hosting almost half of them) and in funding (attracting about 70% of EU investments).

In the European Union (EU), institutions have recognized early on the potential of blockchain and have undertaken initiatives such as the research project #Blockchain4EU: Blockchain for Industrial Transformations, and launched the EU Blockchain Observatory and Forum, the Anti-Counterfeiting Blockathon Forum, as well as a range of calls, research programs and funding for third parties.