Swiss Fintech Funding Down Amid COVID-19

Home/News/Swiss Fintech Funding Down Amid COVID-19
Previous Next

Swiss Fintech Funding Down Amid COVID-19

In the first half of 2020, fintech investment represented 10.4% of all funding going towards Swiss startups. As a comparison, fintech accounted for 15.7% of all invested capital in 2019, showcasing a notable shift in investment trends with investors preferring biotech, according to the Swiss Venture Capital Report Update H1 2020.

Like other sectors, fintech funding has been hit hard by the COVID-19 pandemic with investment down globally in the first months of 2020.

Early-stage fintech companies suffered the most as investors opted to double down on larger, more mature winners.

Overall, Swiss companies raised a combined CHF 763 million through 105 financing rounds in H1 2020, and though the amount is more than a third lower that what was raised during the same period last year, it is actually a fairly good performance considering that no mega-rounds of CHF 100 million or more occurred in H1 2020, the Startupticker.ch report says.

Life sciences and biotech dominated the startup funding landscape in H1 2020 with some of the biggest investment rounds. Biotech accounted for 15.2% of financing rounds and 29.7% of invested capital over the period.

Information and communications technology (ICT), excluding fintech, made up of 39.9% of all funding rounds, while accounting for 21.7% of all invested capital during H1 2020.

In H1 2020, Swiss investors took a bigger role in funding their local startups. The share that Swiss investors contributed rose from about a quarter in the long-standing average to about half. Meanwhile, investment by US and European investors declined sharply, the research found. 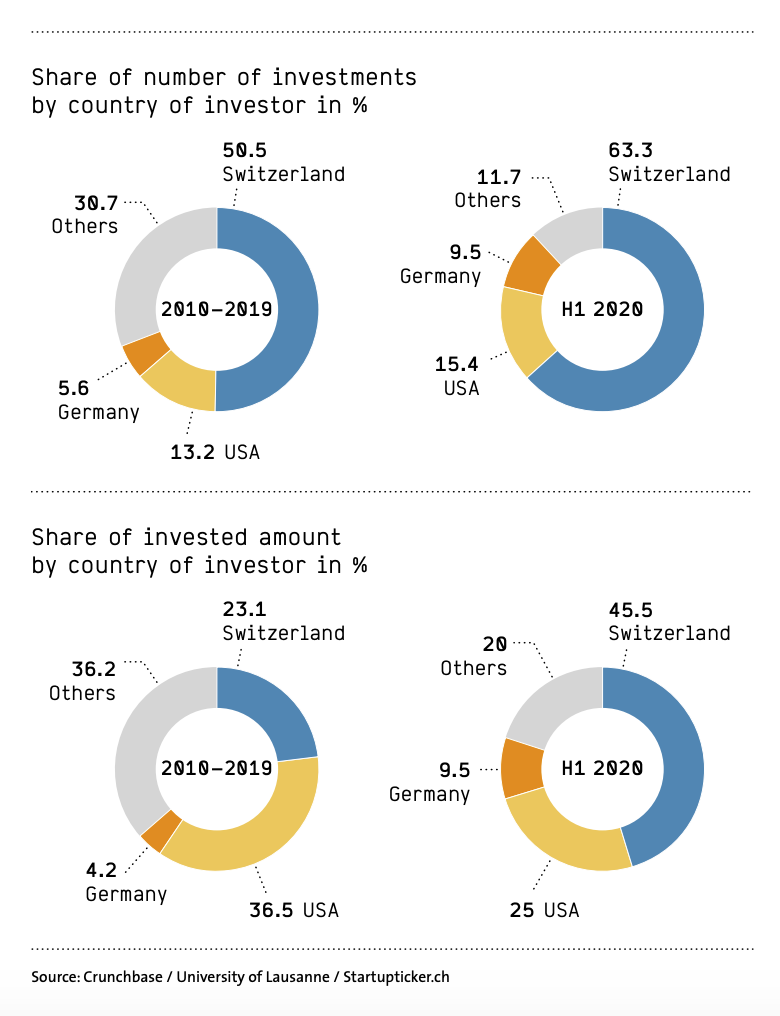 As part of the study, Startupticker.ch conducted a survey of Swiss venture capital (VC) investors. The research found that COVID-19 has not stopped them from working with about 50% of the 29 Swiss VCs surveyed actively fundraising in H1 2020.

Overall, respondents shared optimism with the majority of them expecting to achieve the originally planned amount, and almost one third even showing confidence in exceeding their pre-coronavirus targets.

The pandemic, however, will likely cause a delay in fundraising, with two thirds of managers expecting between one to six months in delay to close their funds.

Unsurprisingly, a majority of Swiss VC investors observed a decline in valuation of startups in the first half of 2020, though the dip was relatively moderate, the research found.

For H2 2020, three quarters of fund managers expect lower valuations compared with pre-pandemic levels, but by 2021, startups valuations should return to their pre-COVID-19 levels.