Will Amazon Find the Same Success With Blockchain as They Did With Cloud?

Startseite » Will Amazon Find the Same Success With Blockchain as They Did With Cloud?
Previous Next

Will Amazon Find the Same Success With Blockchain as They Did With Cloud?

After carving out their dominance in the cloud computing space, Amazon Web Services (AWS) has seemingly set their sights on blockchain with Amazon Managed Blockchain

According to AWS, the fully managed service makes it easier for companies to create and manage blockchain networks, and scales to support thousands of applications and millions of transactions using popular open source frameworks like Hyperledger Fabric.

Amazon office in Minneapolis, via blog.aboutamazon.com

Amazon Managed Blockchain is available in US East (N. Virginia) but will expand to additional regions in the coming year. Support for Ethereum is still in the works and is expected to be made available later in 2019, the company said.

“Customers want to use blockchain frameworks like Hyperledger Fabric and Ethereum to create blockchain networks so they can conduct business quickly, with an immutable record of transactions, but without the need for a centralized authority. However, they find these frameworks difficult to install, configure, and manage,” said Rahul Pathak, general manager of Amazon Managed Blockchain at AWS.

In addition to making it easy to set up and manage blockchain networks, the service also provides simple APIs that allow customers to vote on memberships in their networks and to scale up or down conveniently. 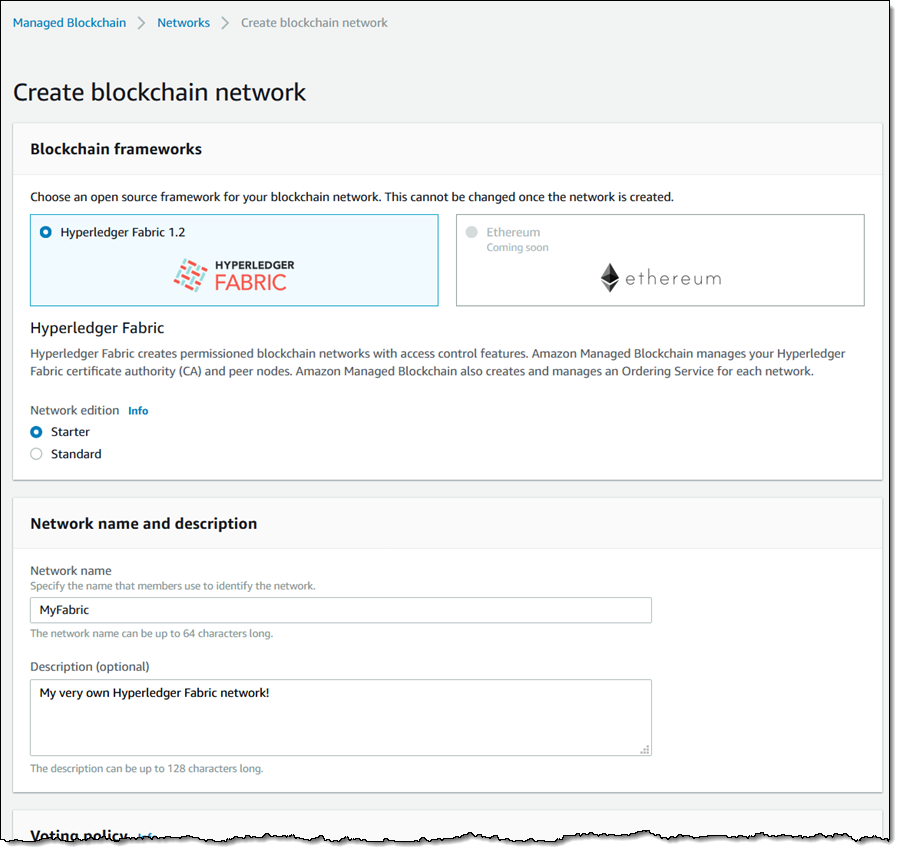 Amazon said the service is already being used by the likes of AT&T, Nestlé and Singapore Exchange (SGX).

Nestlé, a global food and beverage company with more than 2,000 brands and global distribution across 189 countries worldwide, is using blockchain to improve food supply chain.

Andrew Koay, head of blockchain technology at SGX, said the launch of Amazon Managed Blockchain is giving SGX the opportunity to remove some of the complexity in delivering a scalable platform for delivery to market participants.

“SGX sees blockchain technology as a way to bring innovation to our distributed financial marketplace, and we have developed DvP capabilities for the settlement of tokenized assets across different blockchain platforms. We are working with AWS to move our existing investments in Hyperledger Fabric to Amazon Managed Blockchain,” Koay said. “Amazon Managed Blockchain offers businesses the opportunity to eliminate the heavy-lifting typically required in infrastructure setup. This allows us to focus on adding business value and not worry about managing or scaling the underlying platform.”

Amazon Managed Blockchain was initially announced in November 2018, six months after the firm unveiled a partnership with Kaleido, a startup born out of blockchain incubator Consensys, to make it easier for customers to put their services on blockchain.

In China, AWS has partnered with public blockchain project Qtum to develop blockchain-as-a-service (BaaS) solutions for local enterprises and developers.

With the launch of Amazon Managed Blockchain, Amazon is joining other big enterprise players, including Azure from Microsoft and IBM, in the BaaS game.

Last week, Microsoft launched a fully managed blockchain service similar to Amazon Managed Blockchain called Azure Blockchain Services. The service allows for the formation, management and governance of consortium blockchain networks. In 2015, Microsoft was the first to bring blockchain to the cloud.

Network solutions provider Cisco has been involved with blockchain since 2017, co-founding the Trusted IoT Alliance in September to establish a blockchain-based, open source, IoT protocol and set standards.

The post Will Amazon Find the Same Success With Blockchain as They Did With Cloud? appeared first on Fintech Schweiz Digital Finance News – FintechNewsCH.